Some of my friends have already read this because I posted it on my Tumblr (no longer in use). I feel that this information is worth repeating, though. 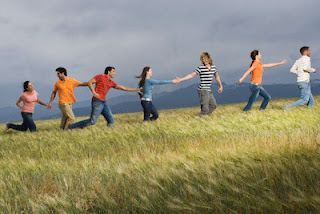 I tend to think that if you have more than one friend you are polyamorous.  So ultimately, probably most people are polyamorous but many may refuse to call themselves that because of taboos or misconceptions and fear.
Here’s one example of a situation, to demonstrate: the best friend and the romantic partner. You have a best friend, whose opinions you take seriously, and who you make compromises with, maybe you see them on a regular basis and have emotional intimacy with. You would consider not dating someone if they said that you and the romantic date/partner were completely wrong for each other and the partner gives them super bad vibes, right?
If you call your relationship monogamous, how do you justify having some of your emotional/intellectual/spiritual/other needs met by someone outside of the monogamous relationship? Why should friendship get to be a special exception to the monogamous rule? Is it because your friendships are assumed to be non-sexual and non-romantic? Why is one kind of emotional intimacy acceptable but not another kind of intimacy? What if your friend is romantically interested in you (but you do or don’t reciprocate), or there’s sexual tension or flirting but neither of you takes it further than that? What if your best friend’s needs are sometimes more important than your romantic partner’s needs? Is it still an OK exception to a monogamous relationship? I think the above situations all represent types of polyamory, but probably most people who call themselves monogamous will go through or have gone through these things and may have struggled as a result of being monogamous.
So I guess that’s why I think monogamy as an institution is harmful, like my friend E talks about. Because where do you draw the line between friendship and something else, and how can anyone have all of their needs met by one person? Monogamy is all about solid lines and inflexibility, which probably more often than not leads to one partner becoming jealous of someone else in the other partner’s life eventually (a close friend, a family member, even a pet could become a source of jealousy). So why not just decide to be polyamorous and be open to negotiating all of your relationships with honest communication? Or, if romance and sex with other people would be bad for your relationship, why not negotiate what is acceptable for the relationship? I guess this might be what I’ve heard E say is “monoamory.” With monogamy there are no negotiations, you’re just supposed to assume that any kind of intimacy outside of your relationship will destroy the relationship—that’s the nature of the beast.
By the way, I have decided that I’m not going to judge other the dynamics of other people’s relationships as long as they have decided on the dynamic together and believe it will be mutually beneficial.
Posted by Mage at 10:11 AM

Other Blogs of Interest!